When using AG Grid React, all of the grid's core rendering (headers, rows, cells etc) is rendered using React. AG Grid React shares the same 'business logic layer' as the other AG Grid versions (Angular, Vue, or just JavaScript) frameworks. This means the features of AG Grid React are identical to the features in AG Grid's other framework flavours. However because the rendering is done 100% in React, the grid works as a native React Component.

The remainder of this page takes a deeper look at the grid's React rendering, including React Render Cycles and also React Developer Tools.

Don't like our new React Rendering introduced in v27? You can turn it off with suppressReactUi=true. However we advise against this long term, as we plan to drop support for the old rendering engine in v28.

The grid renders cells using React, and all parent components of the cells are also written in React, all the way back to the client application. This means all the UI from your application down to the cells, including any provided React Cell Renderers, is all 100% React.

The example below demonstrates AG Grid rendered 100% in React. Note the example has the Age column customised using a React Component.

You can profile the example above using the React Developer Tools and see the internals of AG Grid written in React.

If you want to profile (using React Developer Tools) the example above, do the following:

As the grid is written in React, we welcome trashing it using React profiling tools for how well it plays alongside your application with regards component refresh and wasted render cycles. 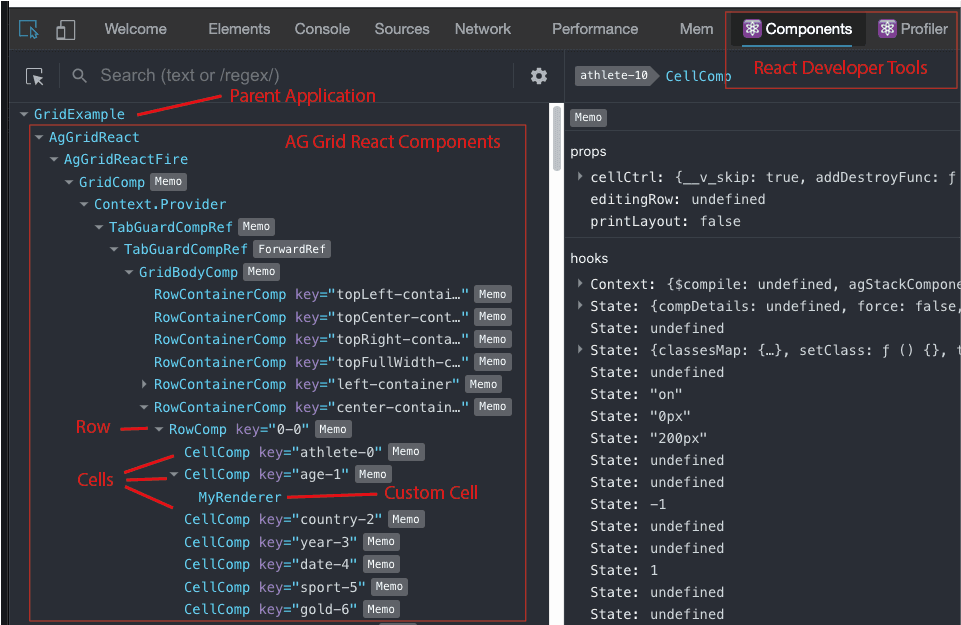 Below is an example showing different types of React Cell Editors. Note the following:

Below is an example showing a grid configured with a custom React Column Header component.

AG Grid does not cause unnecessary render cycles. The following example demonstrates this.

Clicking 'Increase Medals' will re-render the Cell Renderer's as the displayed value is updated.

The rendering of AG Grid is 100% React regardless of what grid features are used.

Below is an example with Range Selection, Checkbox Click Selection and Row Grouping.

Below is an example using Master Detail. When the master grid is AG Grid React, then the detail grids also use AG Grid React. In the example both Master and Detail grids are using React Cell Renderers.

Above we saw customising the grid Cells (Renderers and Editors) and Headers using React Components. All of the other customisations allowed by AG Grid are also supported when reactUi=true.

The example below shows the following customisations: